Agate is the name for numerous varieties of colorful chalcedony, a mineral from the quartz family.
Its name comes from the Achetes river in Sicily, where agates were first found. There it was mentioned in writing by the Greeks long before Christ.
But it was already known in ancient Egypt, because it was used to make carved scarabs, which every Egyptian carried as good luck charms and protective stones.

To find out more about the crystal system, hardness etc. please follow this link.The striped gemstones form in the cavities of volcanic rocks.
The agate is a striped form of the micro-crystalline quartz and is milky transparent. This gemstone can have ribbons and patterns in different shades, widths and numbers, so that each individual stone has an individual drawing.

This interestingly patterned gem is characterized by its versatile nuances, which can reproduce almost all colors of the rainbow.
The colors of the agate range from light basic tones such as white and yellow to red, orange and pink to purple, blue, green, gray and black.

Due to the different compositions, there are individual varieties as result, which are also said to have different healing effects.

Is a healing stone of inner balance and stability.
It is able to keep negative energies away and to convert them.
Its various layers are able to bring hidden ideas to the surface.

Metaphysically, Agate has a lower intensity and vibrates to a slower frequency than other stones, but is highly regarded as a stabilizing and strengthening influence. [Simmons, 6]

The layered bands of microscopic quartz in Agate may appear delicate, they are actually very strong. Is excellent for balancing emotional, physical and intellectual energy, and in harmonizing yin and yang, the positive and negative forces of the universe. [Hall, 39]

Promotes self-acceptance and strengthens self-confidence. This increases the ability for self-analysis and strengthens the awareness of hidden circumstances, which draws attention to problems that disturb one’s well-being.

It increases the mental functions by promoting concentration, increasing knowledge and leading analytical skills to practical solutions. Together with a rock crystal, it can increase memory.

On the emotional level, it can handle negativity and bitterness. It relieves anger, promotes love and gives courage to make new things. This trait can be helpful with any kind of emotional trauma.
It creates a space for security and trust, and at the same time reduces internal tension.
On the spiritual path, the agate raises consciousness towards a collective consciousness.

Agate stabilizes the aura, eliminating and transforming negative energies. Its cleansing effect is powerful at all levels. [Melody, 82][Hall, 39]
Blue Lace Agate, with its blue crystal energy, will open and clear the Throat Chakra. The Throat Chakra is the voice of the body, a pressure valve that allows the energy from the other chakras to be expressed.
Crazy Lace Agate has been considered symbolical of the Third Eye,
The brown and red shades of Fire Agate stimulate the Base Chakra and the gold and orange shades of Fire Agate identify with the Sacral Chakra. The green shades within Agate are associated with the Heart Chakra.

Agates honor Aurora, Roman Goddess of the Dawn and Mother of the Winds. She brings the beauty of dawn each day, the vivid colors streaked and swirled across the clouds.
Agates honor Gaia, the Greek Earth Mother Goddess. Born directly out of Chaos, the primal emptiness, she was the first (or one of the first) beings to appear during the process of creation, and is honored as being the Earth itself.

Rinse under running water at lukewarm temperature is suitable for maintaining the agate. The gemstone is discharged by hematite stones, which are placed in a bowl together with the agate.
Is charged by moonlight together with a group of rock crystals. 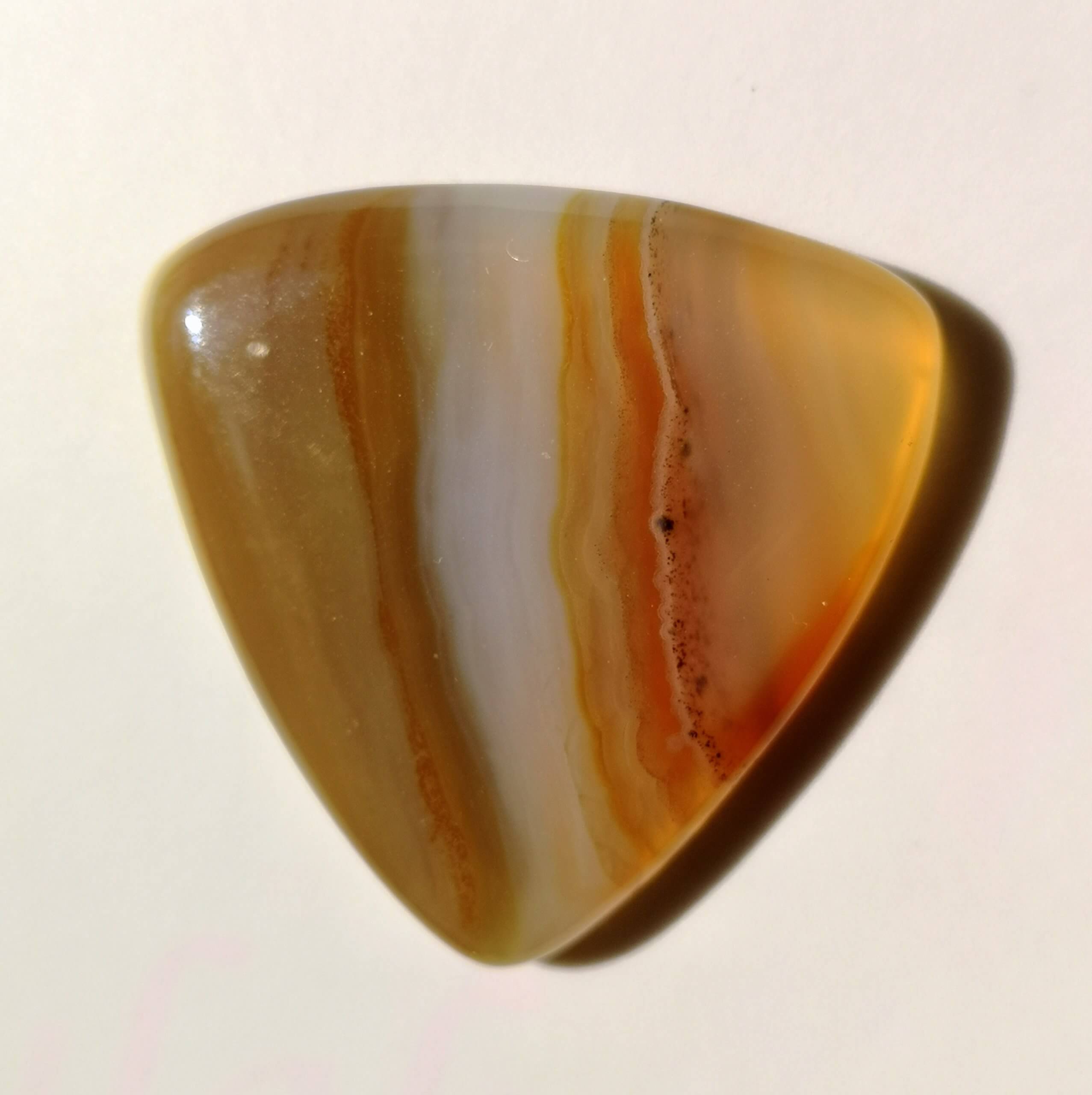 with ribbon-like layers
Indications
In the spiritual realm for firmness, cohesion
In the soul, subconscious for protection, security and inner support
In the mental area for a pragmatic approach to thinking and acting
Physically: for intestines and digestion, promotes the elasticity of the vessel walls and prevents varicose veins. 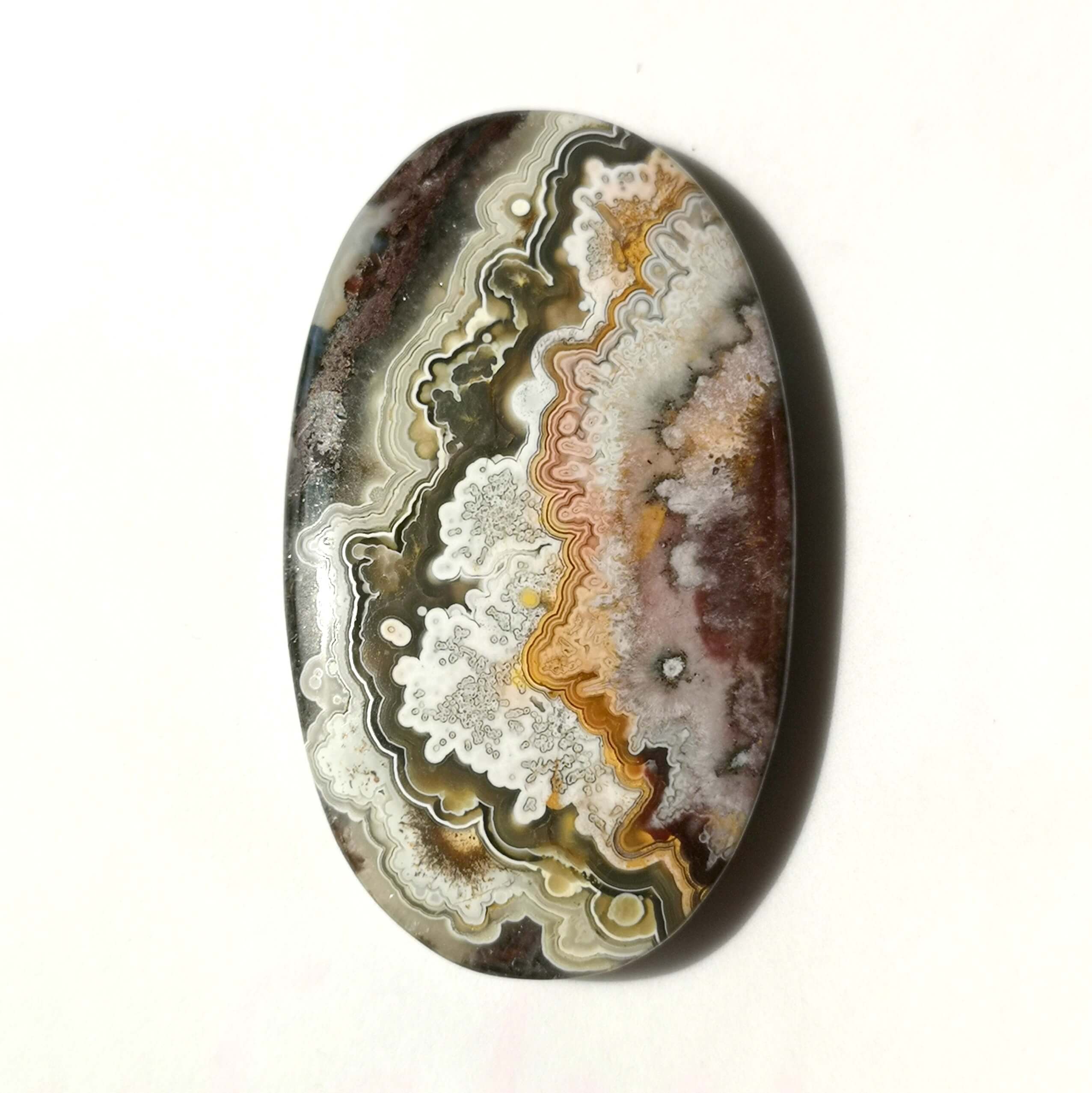 with bizarre straps
Indications
In the spiritual realm, agility, joie de vivre
In the soul, subconscious makes life more intense, encourages curiosity,
In the mental  area it helps to break through the routine of the familiar
Physically very good for infections, insect bites, varicose veins, hemorrhoids and open legs. 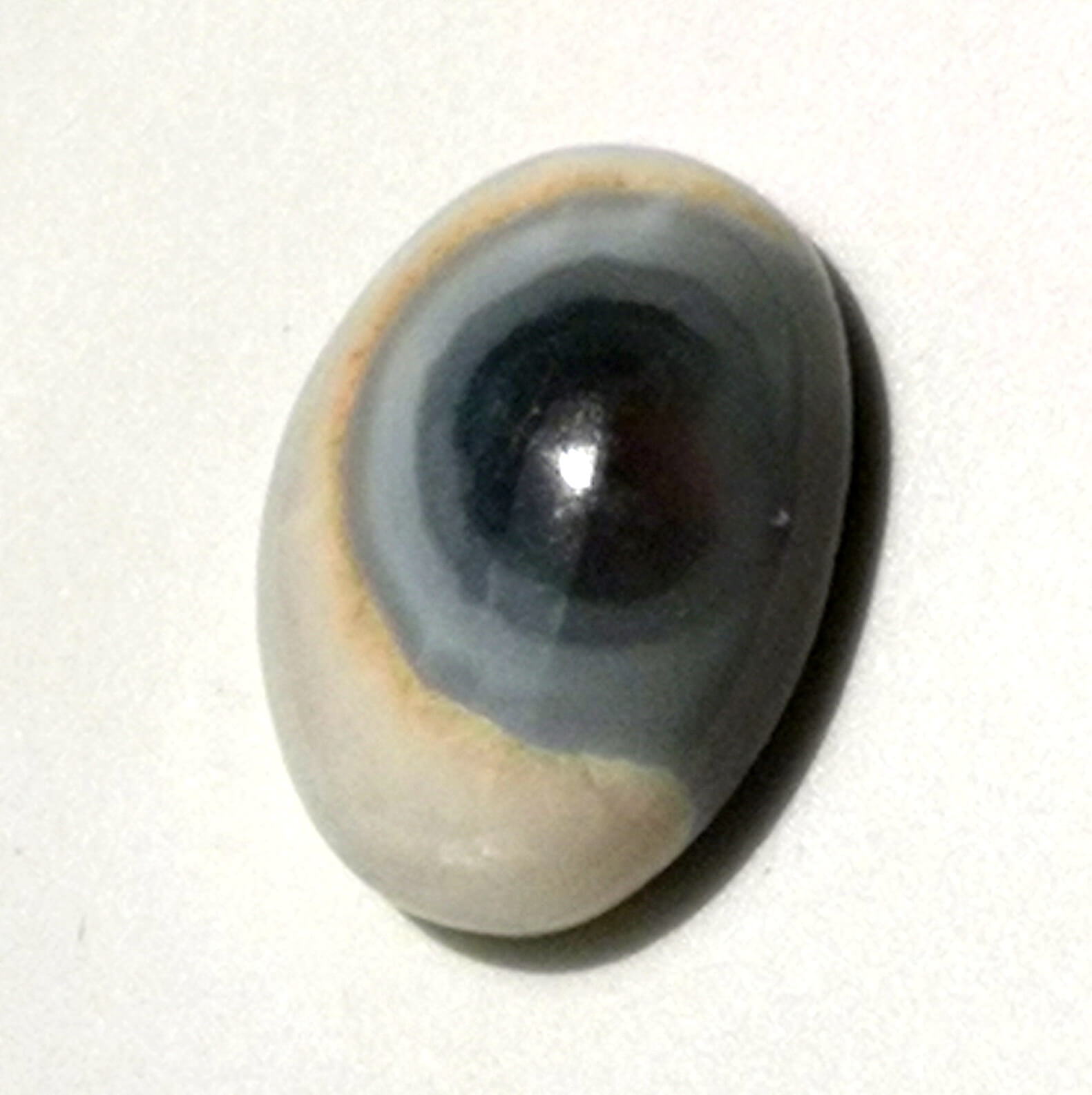 drawing similar to eyes
Indications
In the spiritual realm interest, resistance, protection
In the soul, subconscious steadfastness and in nightmares
In the mental area things help to look in the eye
Physically : for inflammation of the eyes, discomfort of the conjunctiva or retina, glaucoma, for blood vessels and prostate problems. 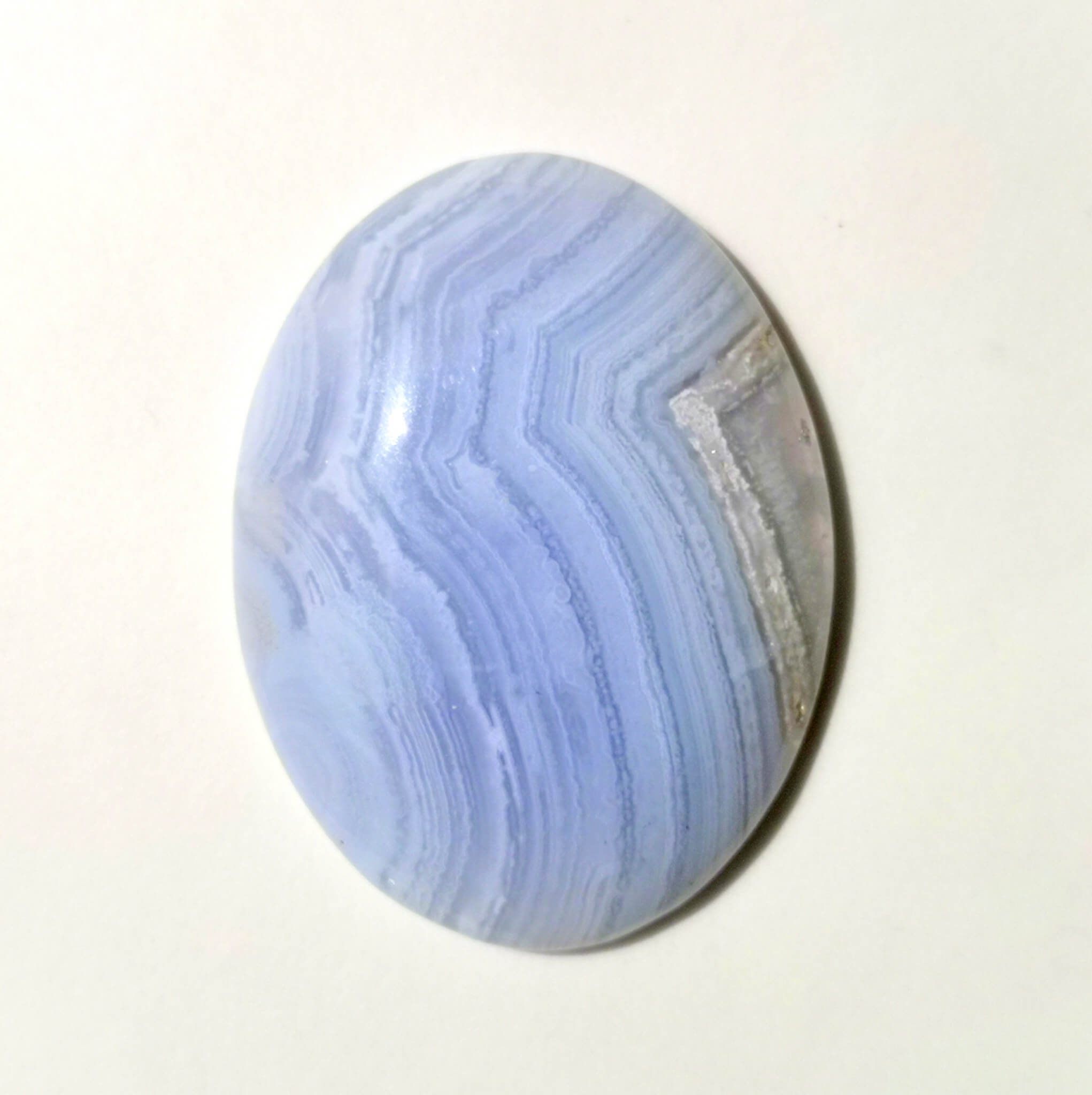 with blue and white layers
Indication
In the spiritual realm communication
In the soul, subconscious it strengthens the art of speaking and self-expression
In Mental it helps to listen, understand and communicate
Physically promotes Lymph flow, thyroid gland, kidneys and bladder, helps with hoarseness, colds and allergies, has a blood pressure and fever lowering effect 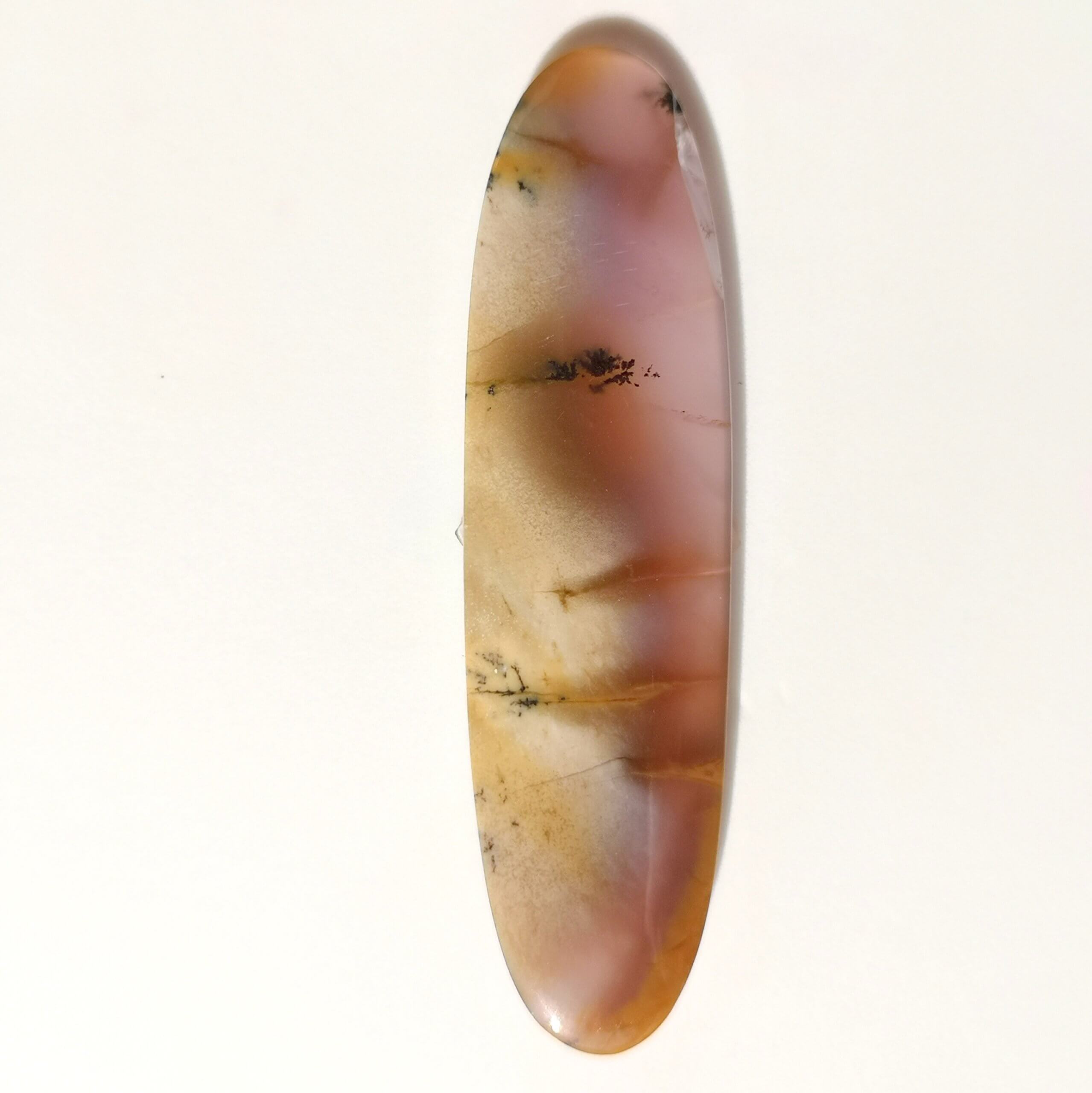 with manganese dendrites
Indications
In the spiritual realm integrity, purification
In the soul, subconscious Overcoming emotional border violations and burdens
In the mental area Observe and solve unpleasant Things
Physically Purification of the tissue; for skin, mucous membrane, lung and intestinal complaints. 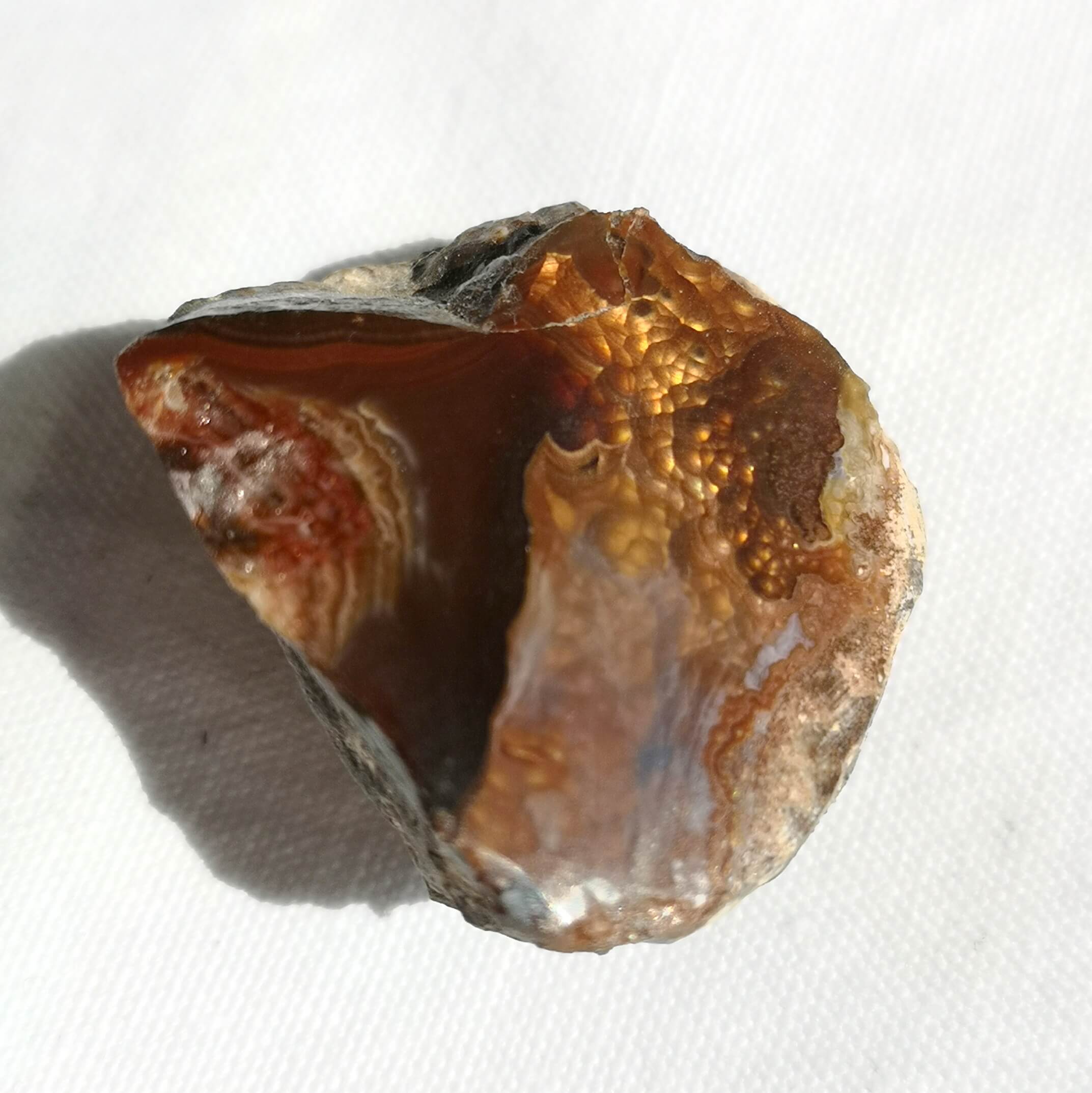 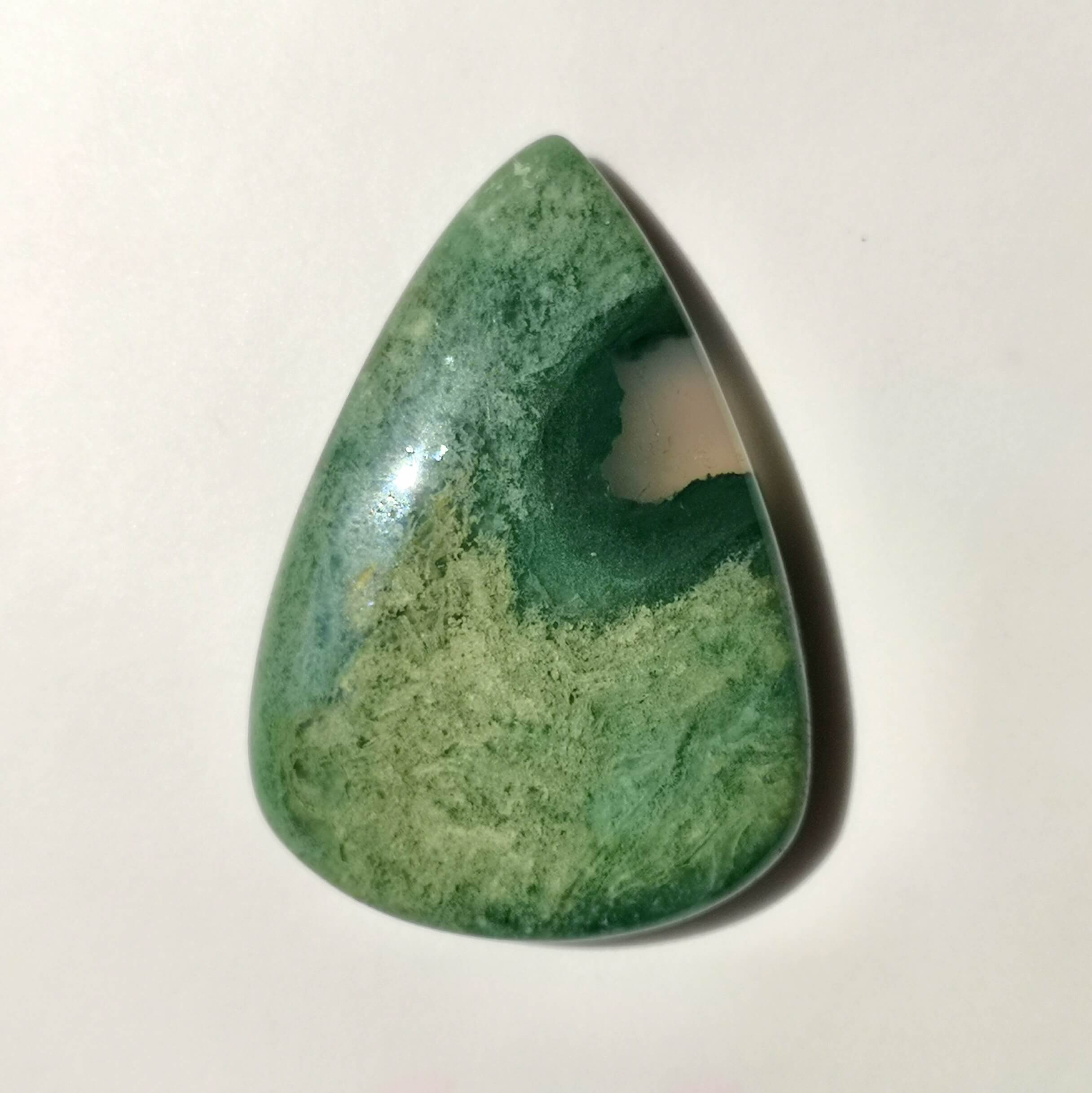 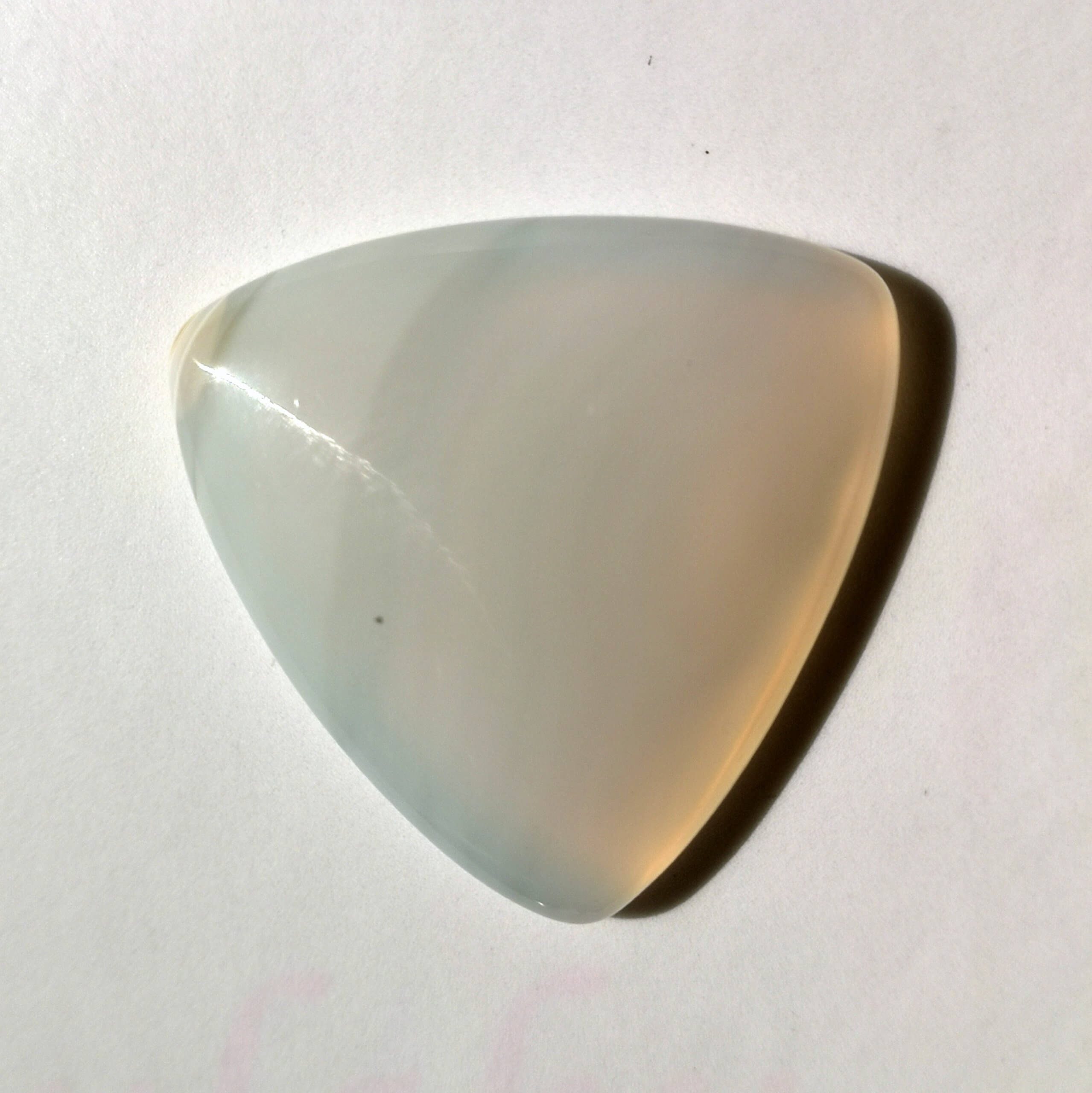 Godsfield Bibles
Stones of the New Consciousness: Healing, Awakening and Co-creating with Crystals, Minerals and Gems

Stones of the Goddess: Crystals for the Divine Feminine

A Wiccan Guide of Magical Healing Crystal to Learn the Secrets and the Power of Gems and Stones; A Fundamental Illustration About ... How to Practice Rituals and Crystal Spells

Please note that as an Amazon Associate I earn from any qualifying purchases, thank you!

Welcome to
My Rewards

Join our loyalty program to unlock exclusive perks and rewards.

By continuing to use the site, you agree to the use of cookies. more information

Welcome to yulahu. We use cookies to give you the best possible shopping experience, to display appropriate advertising and to measure website functionality. By clicking on "Accept" you can agree to the use of all cookies or set here which type of cookies you want to accept. You can revoke your consent at any time. You can find more information in our privacy policy.