Garnet is a powerful energizing and regenerating stone. It balances, strengthens and protects. Represents Fate, Love and Constancy.

Garnet is derived from the Latin name Granatum, a pomegranate, because of the resemblance the granular varieties of Garnet bears to the seeds of that fruit.

Garnet is found the world over, and though commonly known to be red, it is in fact found in a variety of colors and chemical formulas, each with its own set of spiritual properties. [Simmons, 165]

If you want to find out more about Garnet, like chemical formula, hardness etc. please follow this link!

In Europe during the Middle Ages, Garnet was used to enhance truth, faith and constancy, and to dispel melancholy. [Simmons, 165-166] As a Warrior’s Stone, Garnet served as a talisman in the Crusades for both the Christians and their Muslim enemies. [Megemont, 87]

Garnet is said to have been one of the twelve stones in the Breastplate of the High Priest, and has been used as a sacred stone by the Native American Indians, the South American Indians, the Aztecs, the African tribal elders, and the Mayans. It acts with speed to expand one’s awareness due to the flash of lightening contained within, and enhances one’s internal fire to bring creative powers to implementation. [Melody, 290]

Garnet is a powerful energizing and regenerating stone. It balances, strengthens and protects. While it is one of the most common stones, it has different forms depending on its mineral base and in addition to all the healing and spiritual properties listed here

Garnet is thought to have medicinal abilities to reduce body toxins. At times stones were placed in wounds to help heal by encouraging the clotting of the blood. [Mella, 85]

Garnet regenerates the body, stimulating metabolism. It treats spinal and cellular disorders, purifies the blood, heart and lungs, and regenerates DNA. It assists assimilation of minerals and vitamins, including iodine, calcium, magnesium, and Vitamins A, D, and E. [Hall, 136-137] [Melody, 292]

Garnet can alleviate acne, low libido, and disturbances in the cardiac rhythm (except for arterial hypertension, which Garnet can even aggravate). It has been reported to relieve rheumatic and arthritic pain and some psychological illnesses. [Megemont, 87]

Garnet provides a protective influence and a calming stable vitality during use. [Melody, 291] It is thought to heal emotional problems. Placed under a pillow, Garnet is reputed to alleviate bad dreams. Medicine men used it to cure mental depression. [Mella, 85]

Garnet can act as a strong help to balance the energy system, stimulate desires and uplift your attitude. As a balancer stone, Garnet can prevent fears of insecurity and even money losses. They’re lucky stones: lucky for love, success, and for goals. Use Garnet to increase your positivity and popularity, thus enhancing your personal self-esteem. As an energy stone, it can encourage success in business and business relationships. It is a wonderful executive gem, especially for women. [Mella, 86] Square cut garnets are particularly useful in bringing success in business matters. [Hall, 136]

Garnet is useful to have in a crisis, particularly in situations where there seems to be no way out or where life has fragmented. It fortifies, activates, and strengthens the survival instinct, bringing courage and hope into those situations. Crisis is turned into challenge under Garnet’s influence and promotes mutual assistance in times of trouble. [Hall, 136]

Garnet cleanses and reenergizes the chakras. It revitalizes, purifies and balances energy, bringing serenity or passion as appropriate. It inspires love and devotion, balancing the sex drive and alleviating emotional disharmony. Red Garnet in particular stimulates the kundalini energy and aids sexual potency. [Hall, 136] It stimulates from both the Base and Crown chakras to provide for free flow of movement via the spinal column and the inner pathway of light, distributing the appropriate amount of energy to each portion of the body. [Melody, 291]

Green Garnet is associated with the Heart Chakra, located near the center of the breastbone.
Yellow Garnet activates the Solar Plexus Chakra.
The Gold and Orange shades of Garnet identify with the Sacral Chakra, or Second Chakra, located below the naval and above the pubic bone at the front of the pelvis. It controls the flow of energy and is the center of gravity of the body.
In shades of red and black Garnet is also a powerful ally in healing Base Chakra blockages and traumas. The Base, or Root Chakra, is located at the base of the spine, and controls the energy for kinesthetic feeling and movement.

Pyrope Garnet protects the Base and Crown Chakras, aligning them with the subtle body, linking the groundedness of the Base Chakra with the inner wisdom of the Crown Chakra. [Hall, 138][Melody, 500] It assists in illumination of intuition and can be inspiring with meditative and channeling states. [Melody, 563]
Pyrope crystals in shades of pink or light scarlet reflect the Light of the heart and love, and help stimulate the Heart Chakra.

Garnet sharpens your perceptions of yourself and other people. It dissolves ingrained behavior patterns that are no longer serving you, and helps you let go of obsolete ideas. Garnet removes inhibitions and taboos, opening up the heart and bestowing self-confidence. [Hall, 136]

All Garnets honor Sekhmet, the Egyptian Goddess of War and Healing. She is the most powerful goddess of Lower Egypt, and is usually depicted with the head of a lion and the body of a beautiful woman.

Red Garnet honors Hestia, the Goddess of Home and Hearth, because of its fire element and use for protection and strength.

Garnet is the zodiac stone for those born under the sign Aquarius, the mid-winter season between January 20 and February 18.

Garnet is the traditional birthstone of those born in January.

A Warrior’s Stone, Garnet served as a talisman in the Crusades for both the Christians and their Muslim enemies. [Megemont, 87]
As an amulet, Garnet was worn on the body for strong protection against poisons. [Mella, 85]

Garnet should be discharged once a month overnight in a bowl of hematite tumbled stones and recharged either for a short time in the sun or with a rock crystal. 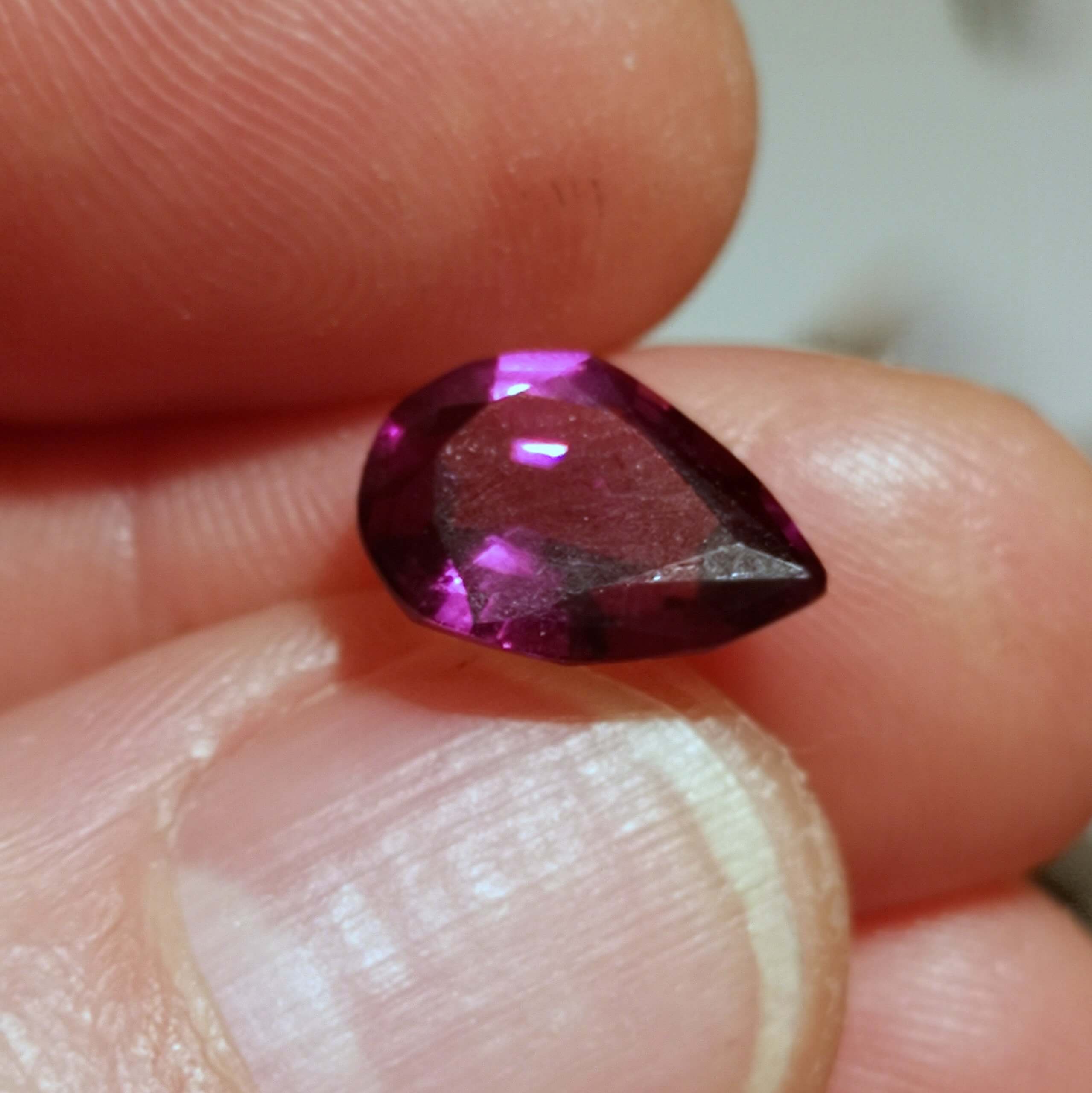 combines the energy of scarlet and red with the more subdued, earthy overtones of brown. It is intimately tied to the Earth, and is a talisman of protection and strength,both physically and intellectually. Indications:
In the spiritual realm: resistance,
In the soul, subconscious: strengthens willpower and helps to live one’s own sexuality
In the mental area: enables insights and own ideas to be implemented against great resistance
Physically: makes active and stimulates circulation, blood formation and metabolism 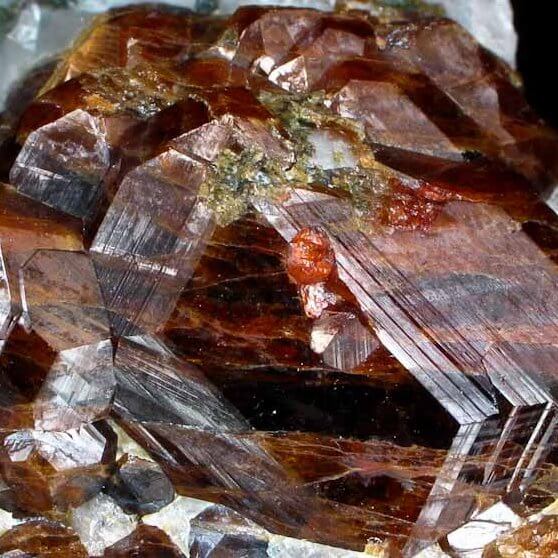 It is well-grounded in Earth’s elemental colors of green or olive, dark yellow, and black. A spiritual stone of higher thinking and self-empowerment, it is also a stone of strength and safety.
Indications:
In the spiritual realm: for self-overcoming and orientation
In the soul, subconscious: for intuition, safety and trust
In the mental area it helps to break through the routine of the familiar
Physically: liver stimulating, blood forming, improves vitality, helps with missing menstruation 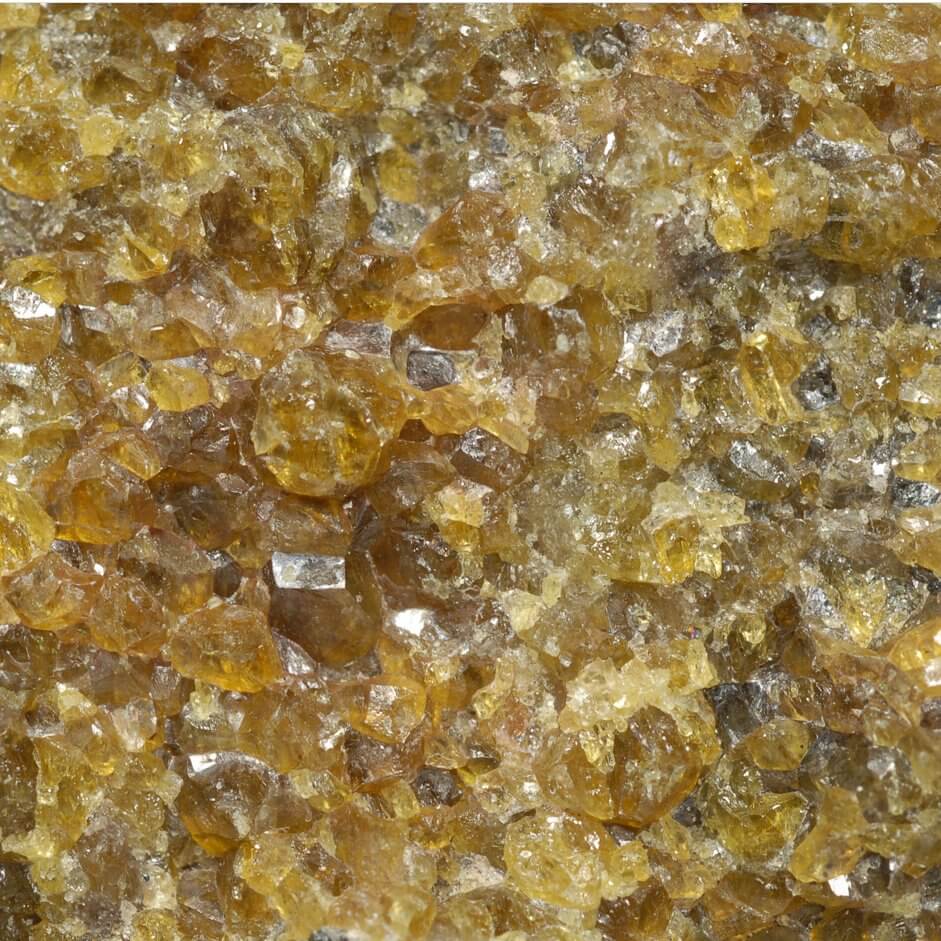 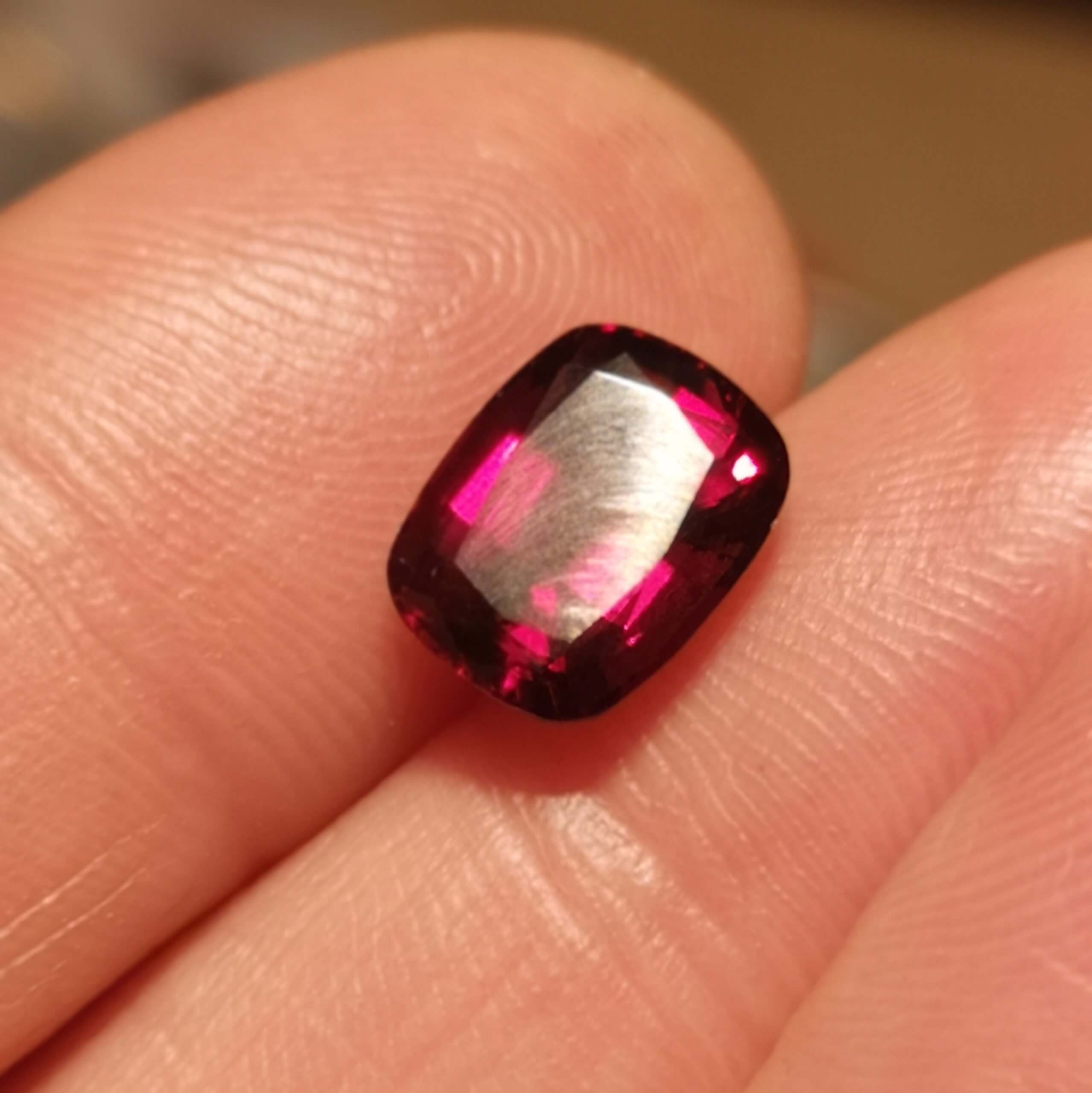 is a mesmerizing stone described as “living fire”. Its crystals range in color from rose red to deep crimson, including shades of scarlet, violet and even indigo.
Indications:
In the spiritual realm: Crisis management, quality of life,
In the soul, subconscious: promotes serenity, courage and endurance, reduces inhibitions, stimulates sexuality
In Mental area: supports the striving for improvement
Physically : improves blood quality and blood circulation, helps with bladder problems 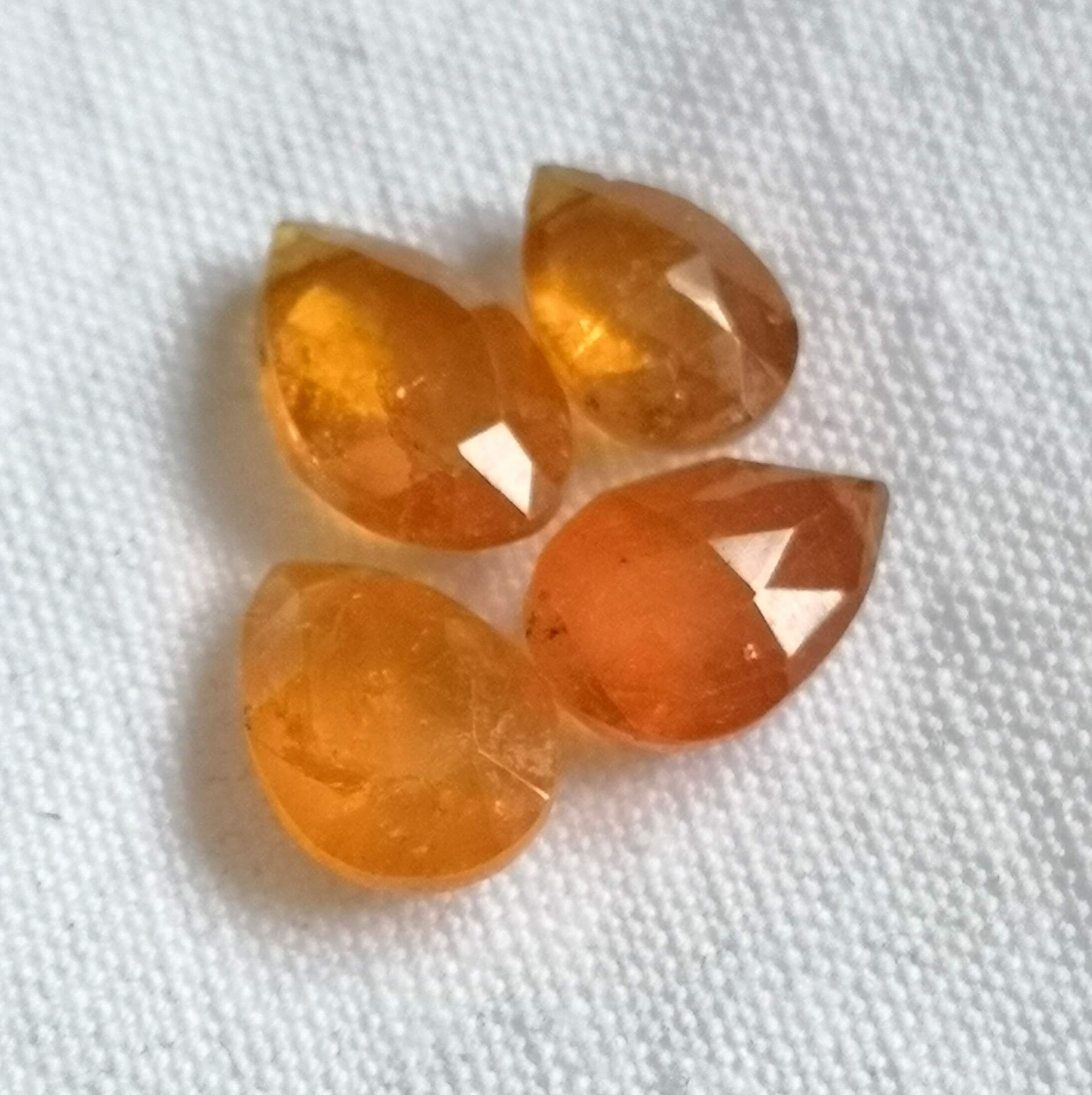 is one of the rarer varieties, known as the garnet of the sun. Its energy shines in shades of dark gold, orange, scarlet and deep red. Indications:
In the spiritual realm: courageousness, helpfulness,
In the soul, subconscious:  helps with nightmares, depression and sexual problems
In the mental area:  helps to address and clarify highly stressful, taboo and embarrassing issues
Physically: strengthens heart, small intestine (nutrient absorption) and immune system 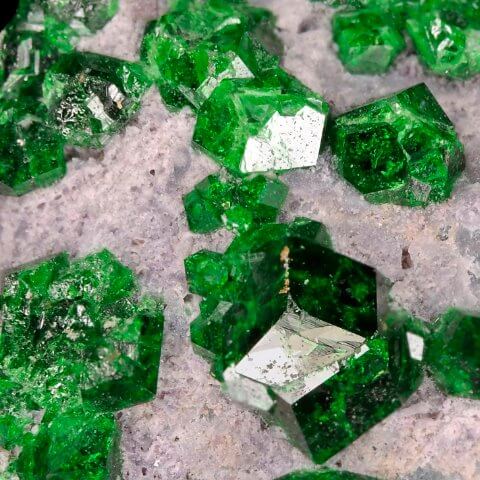 is emerald green color, the only consistently green Garnet. It forms in small, uniform crystals and is rare, most often found in its druzy form, a natural surface coating of tiny sparkling crystals.
Indications:
In Spiritual realm: Individuality, independence
In the soul, subconscious : Makes curious and optimistic
In the mental area: Brings enthusiasm and energy for own ideas
Physically: Strengthens the pancreas, promotes detoxification, has anti-inflammatory and antipyretic effects

See here a great image about the types of garnet

As you can see on the picture linked abowe, there are mixtures of the different Garnet Krystals as well, like of the Almandine Pyrope that are named Rhodolit Garnet is a violet-red shade garnet and the Hessonite or “cinnamon stone” is a variety of grossular Garnet that has a characteristic red color, inclining to orange or yellow.

Godsfield Bibles
Stones of the New Consciousness: Healing, Awakening and Co-creating with Crystals, Minerals and Gems

Stones of the Goddess: Crystals for the Divine Feminine

A Wiccan Guide of Magical Healing Crystal to Learn the Secrets and the Power of Gems and Stones; A Fundamental Illustration About ... How to Practice Rituals and Crystal Spells

Please note that as an Amazon Associate I earn from any qualifying purchases, thank you!

Welcome to
My Rewards

Join our loyalty program to unlock exclusive perks and rewards.

By continuing to use the site, you agree to the use of cookies. more information

Welcome to yulahu. We use cookies to give you the best possible shopping experience, to display appropriate advertising and to measure website functionality. By clicking on "Accept" you can agree to the use of all cookies or set here which type of cookies you want to accept. You can revoke your consent at any time. You can find more information in our privacy policy.